Who is Bozoma Saint John? She's A Woman With The Plan

Once again, it takes a black woman to come in and save the day -- Or in this case, an entire company.

Schnatter, who had been the face of the brand, was asked to take a back seat over controversial allegations.

According to Black Enterprise:

“During an earnings call, the conservative-leaning businessman (and Trump voter) criticized NFL players kneeling in protest against injustice during the national anthem.

“This should have been nipped in the bud a year and a half ago…Like many sponsors, we’re in touch with the NFL. Once the issue is resolved, we’re optimistic the NFL’s best years are ahead,” are some of the comments he is reported to have said.

Soon after, Papa John’s sales declined with Schnatter blaming the fall on the NFL protests. The NFL dropped Papa John’s as the “official pizza” of the National Football League and replaced it with Pizza Hut.

Yet, the final straw for Papa John’s board members was when news came to light that Schnatter had dropped the ‘n-word’ during a conference call designed as a role-playing exercise in an effort to prevent future public-relations snafus for the CEO. Forbes reported that on the call Schnatter said ‘Colonel Sanders called blacks n—–s,’ and complained that Sanders never faced public backlash. The board accepted his resignation almost immediately after the news broke.”

The now struggling pizza chain is desperately attempting to repair its image -- efforts that may be a day late and a dollar short -- but Papa Johns has entrusted Saint John to lead the way.

Saint John joined the organization earlier this summer after a year at Uber, becoming the first chief brand officer for the on-demand private “taxi” company. 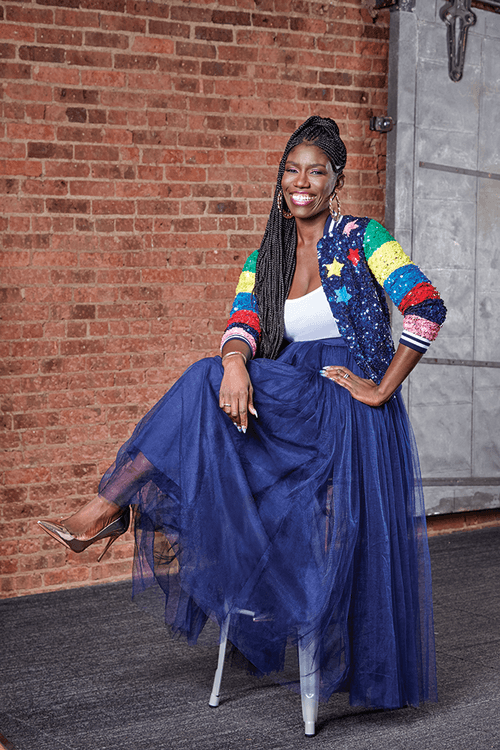 Bozoma Saint John learned at an early age that “you need to connect on your audience’s level not on your own.”

She also joined Uber in the midst of dire circumstances, giving her best to restore hope and help rehabilitate its tarnished image of “sexual harassment, mismanagement, and an overall toxic culture.” So why did she leave Uber?

“Nothing horrible or terrible happened,” she told Tech Crunch.

She wasn’t looking to leave, but Endeavor reached out to her and she couldn’t pass up an opportunity “to change the narrative of what we need to get across”.

“Sometimes people think [pop culture] is superficial,” Saint John states. “These are where stories that are being told are created. If we can help influence that, then that’s so much better for the entire narrative of what we need to get across.”

Though Uber still has issues that it must keep working to improve, Saint John did achieve personal wins during her time the company -- like her partnership with LeBron James and Kevin Durant.

Lebron James and Kevin Durant | Rolling With The Champion | UBER

“I do feel very good about the stuff I was able to do there, but I know I’ll be able to do much more impactful work right now at Endeavor,” Saint John said.

Prior to becoming a big-time executive, Saint John worked for a temp agency that sent her to SpikeDDB, Spike Lee’s advertising firm. She soon rose from making coffee runs to helping Lee brainstorm on campaigns like Beyonce’ Pepsi commercial.

On top of finding her business niche, Saint John found her personal calling. “That became the turning point where, O.K., I can actually use my knowledge of pop culture, running around these streets with my friends, knowing the inside track on things, to help inform business decisions,” John said.

Soon, Saint John found herself striding up the corporate ladder, one stiletto at a time. She took a marketing job at Pepsi, where she worked on projects including the Pepsi DJ Division with D.J. Khaled. In 2016, she went on to orchestrate the Pepsi-sponsored Super Bowl halftime show featuring Beyonce’.

Saint John left Pepsi to head global marketing for Beats, the headphones giant that Apple acquired in 2014 for $3 billion. Hitting the ground running, she came up with the popular ad campaign for Apple Music, which featured Mary J. Blige, Taraji P. Henson, and Kerry Washington bonding over heartbreaks, music, and Siri.

In 2016, Ms. Saint John became the first black woman to walk on stage at Apple’s developers’ conference, doing so with her signature style and touch - blasting old-school rap in a room filled mostly with white men.

So who is Bozoma Saint John? She is a super “badass”, top ‘dawg’ of brand and marketing, and a no-nonsense, take-charge phenom.

More In Women In Power