Who Wore What Where

Who Wore What Where
Written by PhenomenalMAG Staff

We all know that "Black don't crack" and Queens don't crumble, but Mary J. Blige has completely flipped the script and turned 50 into #GOALS.

MJB took the beach on her 50th birthday and shut the world down with her bronzed, brown perfection. Striking each pose with a goddess glow, she flaunted her ultra-fit, flawless curves in a sexy gold bikini that sang on her skin as beautifully as her iconic voice.

She placed a few snaps on Instagram for us to enjoy, but she also shared beauty and wisdom from the inside out. Kicking off her impromptu shoot from paradise, Blige expressed her gratitude and appreciation for all of her fans wearing a black, peek-a-boo, sarong-style dress that served us legs as she covered her breast. She capped the look with a cascade of signature blond, braids falling gracefully from a high bun.

“I have to thank everyone for the overwhelming amount of love sent my way for this milestone birthday,” the “No More Drama” singer wrote on Instagram. “Words can’t really express how much I appreciate you ALL! May God continue to protect you and yours, and bless you with all your wants, needs, and desires.”

Blige then brought the thunder with her bombshell bikini, serving us two shots of golden perfection from different angles. Just as she's worked hard for her sexy physique, she says her inner peace and wisdom are equally hard-won.

"Tough Love is the therapy!" she captions one post, finishing it off by calling herself "#MaryJFly."

The trip may be a celebration on several levels for the singer, who finalized her difficult divorce from producer Kendu Isaacs in 2018. After 13 years of marriage, Blige filed for divorce in 2016 but had to fight hard to break free, both emotionally and financially.

Though she initially credited him for help her to overcome drug addiction and depression, in the end, Isaacs hit her with a huge request for spousal support. According to documents People obtained in 2017, Blige said Isaacs wanted $110,000 per month for "supporting [Martin’s] parents and his children from another relationship which he lists as ongoing monthly expenses." He also "claimed he spent more than $420,000 on 'travel charges' for a girlfriend."

After temporarily paying Isaacs $30,000 per month and having a few years to reflect, Blige now realizes that the real power behind her healing was hers all along.

“Well, when I look back, I see that we all want what we want. And we want it to be the way we want it to be,” she told Self. “I wanted a savior. I’d been hurting so long, and so much, and so bad.” She added, “he did not deserve that credit.”

Blige conquered drugs and alcohol on her own, opting not to seek professional help. “You’re taking drugs so you can go out and feel courageous, or go out and feel beautiful or whatever. You’re doing it to cover up something,” she said.

MORE IN WHO WORE WHAT WHERE 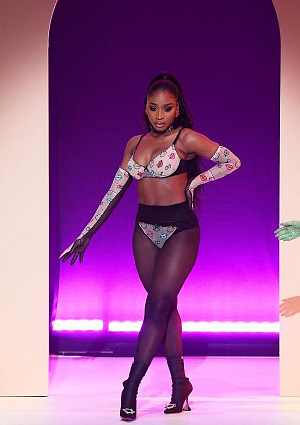 Who Wore What Where

Normani’s Fenty X Savage Look: What She Wore & How To Get It