“It just takes a little bit of work and a whole lot of love.” Culturally, Hair Love is the most fundamentally appropriate representation of a black family and the patience needed for proper black hair care. Yet, this beautiful short is about much more than just “hair.”

Hair Love is an animated short film that centers around an African American father - Stephen - and his daughter, Zuri. Though it is only 5 minutes long, the film packs a major punch and hits the major dynamics of self-love and care.

After being awakened by her pet cat, Zuri realizes that today is a special day, and she wants to look her absolute best. She rushes out of bed, throws on her pretty dress (that is already laid out), and makes a beeline straight to the bathroom. Pulling up a chair, Zuri sits in front of the bathroom mirror in an attempt to do her own hair. Zuri pulls off her hair bonnet and quickly realizes that her “major hair” may actually be a lot of work. No worries, she’s “ready to do this,” as Zuri is up for the challenge. On her tablet, Zuri begins to swipe through a couple of DIY videos from a hair blog titled, Hair Love, a tutorial channel where her mom uses Zuri and herself as a muse. After spotting and attempting the hairstyle that spoke to her heart, the outcome is a complete disaster. 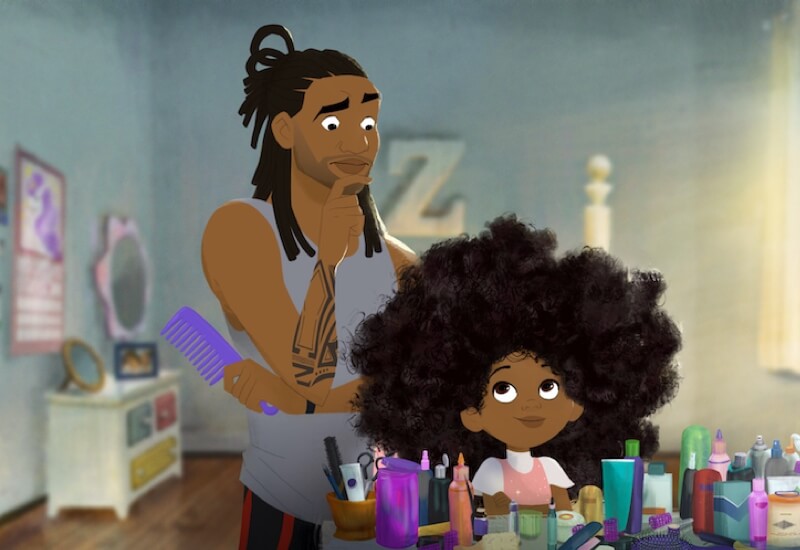 Zuri’s frustration at the outcome of her hair is a familiar feeling that we as Black women know all too well. Whether we’re transitioners, newly naturals, or even vets, we’ve all gone through the process of learning our hair, hating it, and eventually falling in love with accepting and embracing our kinks, coils, and curls for what they are.

As mentioned on Cherry’s website, “Despite having long locks, Stephen has been used to his wife doing his daughter's hair, so when she is unavailable right before a big event, Stephen will have to figure it out on his own. This sounds simple enough, but we soon come to find that Zuri's hair has a mind of its own.”

When Stephen walks in on Zuri, he notices her unsuccessful style and the lack of time the two may have left to correct it. Zuri enthusiastically shows her dad the style she wants, in hopes that he would be her ‘hair-0’ coming to save her from her ‘hair-mare’. Stephen wants to but is becoming overwhelmed by the massive amount of hair products, tools, and accessories. He gladly opts for a hat, but Zuri was not having it, giving him a wide-tooth comb instead. Grabbing the comb, Stephen sections Zuri’s hair down the middle as if he’s parting the Red Sea. Stephen finds himself tussing, fussing, and fighting through the tangles in Zuri’s hair, which has a mind of its own -- Hair 1, Stephen - 0.

After running out of patience and throwing in the towel, Stephen once again grabs the hat and places it on Zuri’s head, and a now disappointed Zuri runs to her bedroom, and closes her door to sob in peace. As Stephen sits at the base of his daughter’s door in his efforts to get her to come out of her room so he can comfort her, he begins to hear his wife’s voice (Issa Rae) playing from one of the videos.

‘See, now wasn’t that easy. All it takes is some confidence and a willingness to get started.”
Zuri’s door opens and she shows Stephen the video in hopes of him giving it another go-round. “And even though I’m not there, I’ll guide you through this,” the video continues to play, as he’s picking himself up off the floor and tearing up. “And remember, the road ahead might look rough, but you can make the journey with a little bit of work and a whole lot of love.”

Watch the video below to find out how Zuri’s hair turns out, but first, grab your tissues -- I sure wish I’d had some readily available.

Hair Love is a Sony Pictures Animation film that is written, directed, produced and edited by former NFL wide receiver, turned filmmaker Matthew A. Cherry, who played for the Jacksonville Jaguars, Cincinnati Bengals, Carolina Panthers, and the Baltimore Ravens, and illustrated by the talented Vashti Harrison. Fans who went to the movies to see The Angry Birds Movie 2, were able to see the animated feature before the movie started. The Hair Love picture book is available to purchase on Amazon ($10.96) and Penguin Random House ($17.99).

A ‘Queen & Slim Movie Review’: A Journey of Their Tragedy & Fairytale Love

Her Thoughts - ‘Queen & Slim’: Through the Lens of Melina Matsoukas