Once asked how she felt about being “a legend,” Ella Fitzgerald replied: “I don’t think I noticed it at first.

But when Norman Granz and I began recording the Songbook series in the mid-50’s, it just seemed that more people began to like my singing.”

“The awards I started winning didn’t make me feel important, but they made me realize people loved me. And then kids started calling me ‘Ella’ -- half of them never even mentioned 'Ella Fitzgerald’ -- just ‘Ella.’”

Though her first love was dance, even performing a dance routine with her friend Charles Guilliver in clubs as a teenager, it was her musical talent that ultimately pulled her into a life of fame, a place where she is “renowned both for her delicately rendered ballads and her pyrotechnical displays of scat improvisation.”

In a career that spanned six decades, Fitzgerald’s blessed, jazzy, silvery voice rightfully earned her the sobriquet “first lady of song,” made her one of the most celebrated jazz singers of her generation, and gained her the admiration of most of her peers.

“Man, woman or child, Ella is the greatest,” musician Bing Crosby once mentioned. Mel Thorme hailed Miss Fitzgerald as having “the best ear of any singer ever.”

“Her apparent equanimity and her clear pronunciation, which transcended race, ethnicity, class and age, made her voice of profound reassurance and hope,” the NY Times wrote about her.

With a repertoire encompassing show tunes, jazz songs, novelties, bossa nova, and even opera, Fitzgerald would perform with big bands, symphony orchestras and small jazz groups over her career, and she often found herself bouncing around between different labels under various circumstances.

During her career, Fitzgerald recorded with Duke Ellington, Count Basie, and Louis Armstrong, but it was her series of Songbook albums that helped to elevate the work of the best American songwriters to a stature widely recognized as art song. 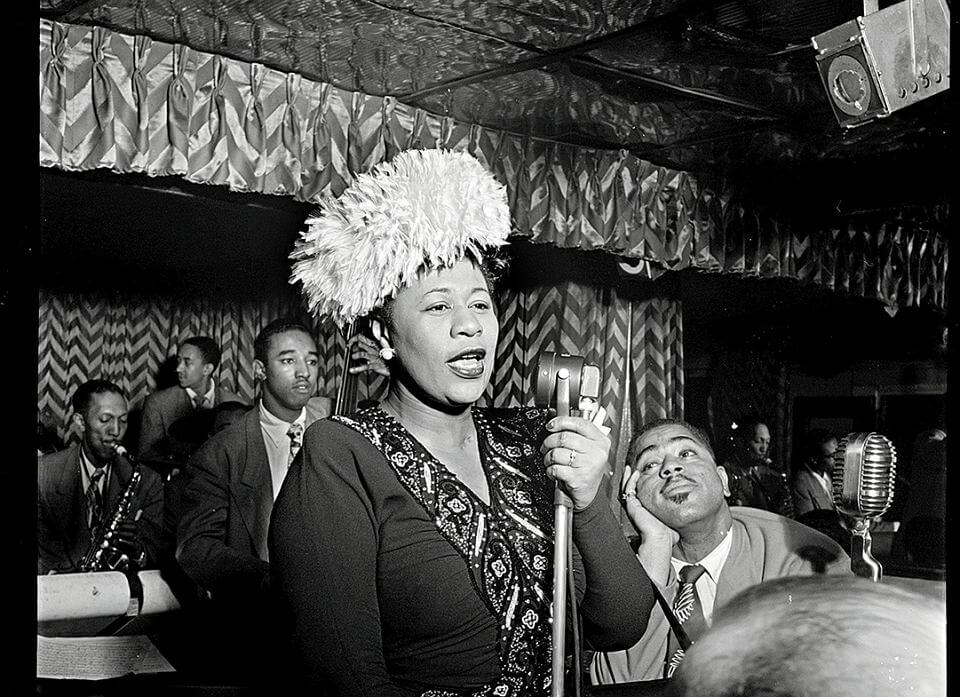 Though most biographies state her date of birth as 1918, Miss Fitzgeralds’s birth certificate and school records show her being born on April 25, 1917, in Newport News, Va. Her father, William Fitzgerald, and mother, Temperance Williams Fitzgerald, separated within a year of Ella’s birth. Shortly after parting ways, Temperance and Joseph Da Silva, a Portuguese immigrant, moved to Yonkers along with Ella. Fitzgerald would find herself moving again, to live with her aunt in Harlem, when her mother suddenly passed away in 1932.

“My mother brought home one of her records, and I fell in love with it,” Fitzgerald once said. “I tried so hard to sound just like her.”

She made her first stage debut in an amateur contest at the Apollo Theater on Nov. 21, 1934, winning first prize by singing two songs, “The Object of My Affection” and “Judy.” This caught the attention of Chick Webb, the band leader and drummer, who was hesitant to sign her to a contract because she was, according to Mario Bauza, a “diamond in the rough” with a look that was “gawky and unkempt” in appearance. But her sound superseded her appearance, leading Webb to offer her a job, and it was during Webb band’s residency at the Savoy Ballroom in Harlem where her reputation began to fully blossom.

"I thought my singing was pretty much hollering," she recalled many years later, "but Webb didn't."

She married Benjamin Korengay, a shipyard worker, who was also a petty thief with a criminal record, but the couple divorced two years later. In 1947 at the age of 30, she then fell in love and married bassist Ray Brown, settled in East Elmhurst, Queens, and adopted Ray Jr., her half-sister’s son. The couple eventually divorced because of conflicting schedules, though they continued to work together. “In 1957, there were reports in the Scandinavian press that she had secretly married Thor Einar Larsen, a Norwegian impresario.”

1n 1942 and 43, Miss Fitzgerald began to incorporate elements of be-bop rhythm and harmony into her singing. Around the same time, she recorded a version of “Flying home,” a sound she also sensationalized in the version of “Lady Be Good.”
She went on to record for the likes of Decca Records between 1935 and 1955, and while under the supervision of producer Milt Gabler, she was paired with the vocal group Ink Spots for several hits including “I’m Making Believe” and “Into Each Life Some Rain Must Fall.”

With her music being largely dictated by the fads of the moment, her pre-1955 pop recordings were artistically mixed and stood distinct from her work as a swing and jazz singer in nightclubs. But when Miss Fitzgerald met Norman Granz, the impresario of popular Jazz at the Philharmonics series, her life began to take a turn after he invited her to join the touring jam session in 1949. He would eventually become her manager, and “How High the Moon,” evolved to become the “unofficial signature tune of the series.” When her contract with Decca Records expired, she would later become Mr. Granz first signed artist under his new Verve label. There, she undertook the series of landmark Songbook albums, transcending her voice to an audience of non-jazz music connoisseurs. 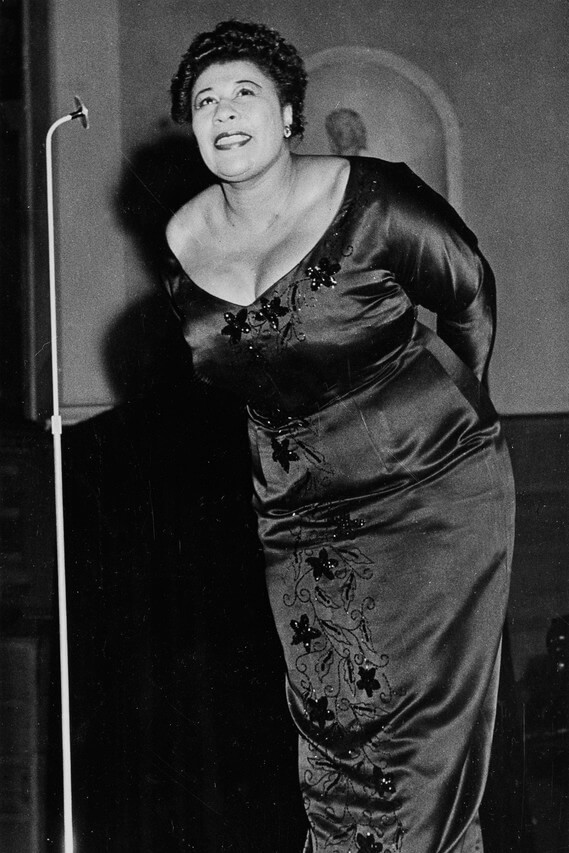 "I had gotten to the point where I was only singing be-bop," she later recalled. "I thought be-bop was 'it,' and that all I had to do was go someplace and sing bop. But it finally got to the point where I had no place to sing. I realized then that there was more to music than bop. Norman came along, and he felt that I should do other things, so he produced The Cole Porter Songbook with me. It was a turning point in my life."

With her interpretation of the works of Irving Berlin, Harold Arlen, Duke Ellington, the Gershwins, Jerome Kern, Johnny Mercer and Rogers and Hart, her Songbooks series “became the prototype for a series of anthologies recorded over more than a decade,” with Ella Fitzgerald Sings the George and Ira Gershwin Songbook becoming widely regarded as the greatest of the collection.

She made her first feature film appearance in Ride Em Cowboy in 1942, appeared in Pete Kelly's Blues in 1955, and presented her own concert at the Hollywood Bowl in 1957. In April 1958, she gave a Carnegie Hall concert with Duke Ellington to celebrate the release of her four-disk set, Ella Fitzgerald Sings the Duke Ellington Songbook. 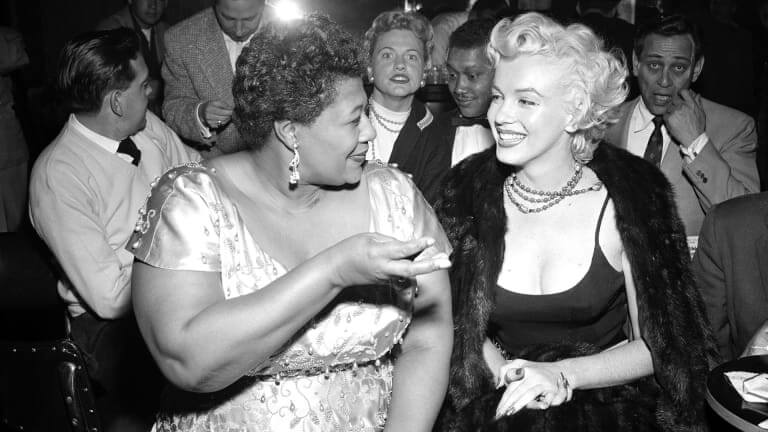 A workaholic who was often on the road 40 to 45 weeks each year, Fitzgerald first showed signs of fatigue by collapsing on stage during a 1965 concert in Munich.

Mr. Granz sold Verve records to MCM, and when her contract was up for renewal in 1966, she was not re-signed. Fitzgerald was moved to Capitol, where her producer, Dave Dexter, promised to give her a “totally different sound” -- one which included a religious record, an album of country music, and a Christmas collection. The new music sound left her insecure and groping for a new pop identity.

She then found herself signing to another label, Reprise Records, where she tried her hand at singing contemporary hits by the Beatles, Burt Bacharach and Marvin Gaye, but just as with her country songs, rock and soul proved to be uncongenial genres.

Fitzgerald returned back to where her heart was, jazz, and back under the guidance of Mr. Granz, who founded a new Pablo label in 1973. From there, she recorded four duets with guitarist Joe Pass (made from 1973 to 1986) and another Songbook album devoted to Antonio Carlos Jobim. She even began to perform regularly with symphony orchestras, and in 1974, she teamed up with legendary Frank Sinatra and Count Basie for a two-week concert event at the Uris Theater in New York. Those performances reportedly “grossed more than a million dollars.”

But by the early 1970’s, Fitzgerald's health began to catch up with her. She began to have eyesight problems complicated by diabetes, and in 1986, she had heart surgery. Despite her illness, though, Fitzgerald remained the workhorse that she always was. She later returned to the stage and performed at least once a month into the early 1990’s, even as her remarkable rhythmic acuity and voice began to slowly deteriorate. 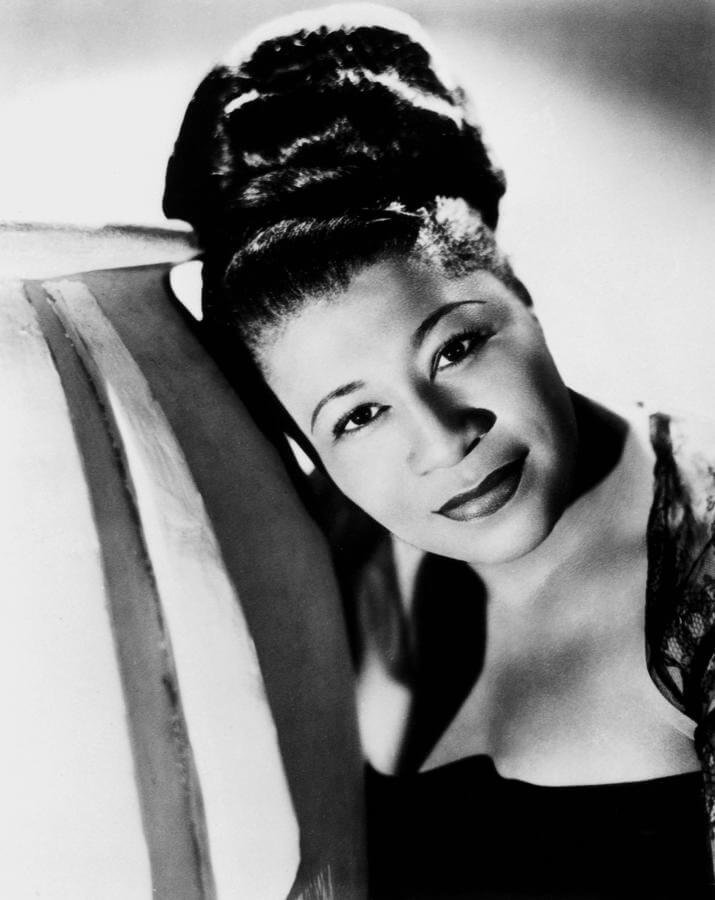 On June 15, 1996, Miss Fitzgerald passed away at the age of 79 after suffering from diabetes and eyesight circulatory system complications for many years. In 1993, both of her legs were amputated below the knees. She is survived by Ray Brown Jr. and a grandchild.

Off-stage, Miss Fitzgerald was a shy person and extremely sensitive to criticism who lived a quiet, self-protective life in a 13-room house in Beverly Hills, Ca. She maintained a small circle and often kept the company of old friends, including members of the Count Basie and Duke Ellington orchestras and other singers like Carmen McRae, Sarah Vaughan and Peggy Lee.

During her career, she garnered countless awards and commendations, including “honorary doctorates at Yale and Dartmouth, the National Medal of Arts, and 13 Grammy Awards, including one in 1968 for Lifetime Achievement. In 1979 she was given a Kennedy Center Award for her lifetime in the performing arts.”

As she accepted her honorary doctorate of music from Yale, she commented with her characteristic modesty, "Not bad for someone who only studied music to get that half-credit in high school." 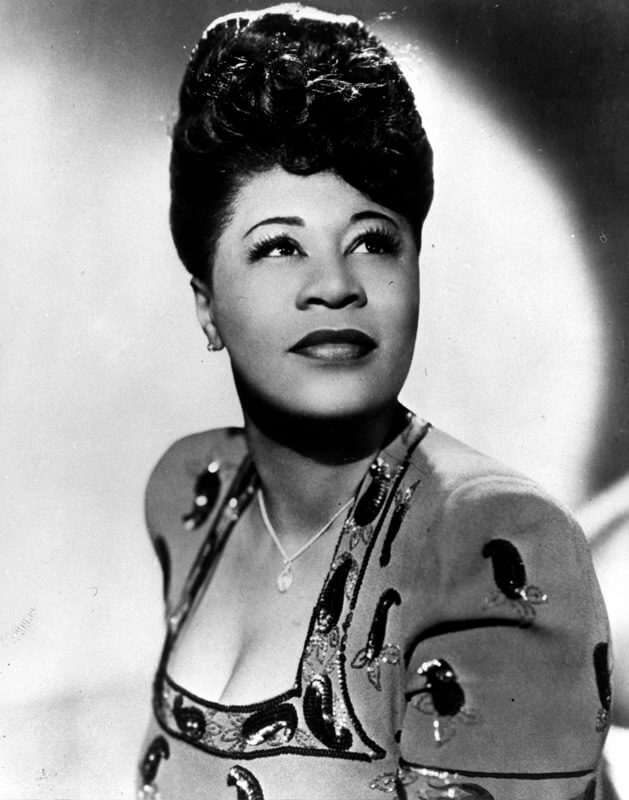 Ella Fitzgerald was one of the most prolific recording artists in jazz. These are some of her best albums:

- "Ella Fitzgerald: 75th-Birthday Celebration" (Decca Jazz). A two-disk, 39-song collection, it includes the cream of the singer's pop output recorded for Decca between 1938 and 1955.

- "Like Someone in Love" (Verve). This lush collection of 19 ballads recorded in 1957 with Frank DeVol's orchestra is her most romantic album.

- "Mack the Knife: The Complete Ella in Berlin" (Verve). This classic live album was recorded in 1960 when the singer was at the height of her powers.

- "The Intimate Ella" (Verve). Originally released in 1960 under the title "Ella Fitzgerald Sings Songs From the Soundtrack of 'Let No Man Write My Epitaph,' " the collection of 13 ballads recorded with the pianist Paul Smith is a neglected masterpiece.

- "The Complete Ella Fitzgerald Songbooks" (Verve). Taken together, these 16 disks, recorded between 1956 and 1964, constitute the singer's crowning achievement. The tributes to Cole Porter, Rodgers and Hart, Duke Ellington, Irving Berlin, George and Ira Gershwin, Harold Arlen, Jerome Kern and Johnny Mercer can also be purchased individually. Although the Cole Porter collection, which was the first, is the most famous, it is not the best. The 53-song Gershwin album, recorded with Nelson Riddle's orchestra, is the artistic peak.

- "Ella and Basie: On the Sunny Side of the Street" (Verve). A swinging powerhouse, released in 1963.

- "Fine and Mellow" (Pablo). A wonderful swinging album from 1974, recorded with an all-star small ensemble. 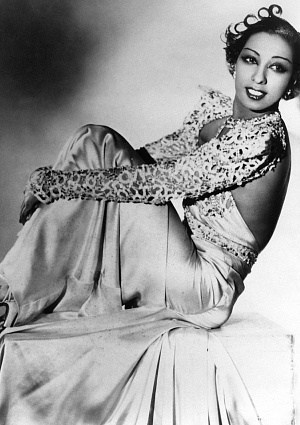 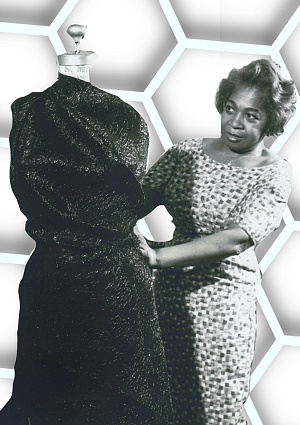