Meghan Markle - A Final Goodbye To Being Fucked & Mistreated

From child’s play to adulting, there comes a time when we realize that all that glitters isn’t necessarily gold and that not all sparkles mean glamour and glitz.

Though they hailed from two different worlds, Prince Harry and Meghan (Markle), Duchess of Sussex, came together and united as one in the name of love.

This is supposed to be a happy, joyous time in Markle’s life. Yet since she became a royal, Markle has been met with an endless stream of unwelcome online bullying attacking her family, race, body, and even parenting skills since birthing son Archie Mountbatten-Windsor.

“I lost my mother and now I watch my wife falling victim to the same powerful forces’, Prince Harry announced earlier last year, as the couple pursued legal action against the tabloids that had ‘bullied’ the former ‘Suits’ actress.

‘There comes a point when the only thing to do is to stand up to this behaviour, because it destroys people and destroys lives. Put simply, it is bullying, which scares and silences people. We all know this isn’t acceptable, at any level. We won’t and can’t live in a world where there is no accountability for this.”

What’s even more surprising is that the Duchess did nothing to cause the bullying, and because of Markle’s royal status, her title prevented her from publicly defending herself.

In a survey conducted by PlayOJO which surveyed 2,000 people, results showed that with 50% of the votes, the Duchess has been named UK’s Most Unfairly Treated Person of 2019.

Markle, is black, beautiful, intelligent, an advocate for the less fortunate, and a woman who was often criticized for breaking the rules, not following protocol, and prioritizing her own happiness over the expectations of strangers.

Then on January 8, 2020, Her Royal Highness The Duchess of Sussex somehow woke up, adjusted her crown, and told the world that she was stepping away.

Prince Harry, Duke of Sussex, and Meghan announced they plan to step back as “senior members” of Britain’s royal family.

In a statement shared on their official Instagram page, the couple announced that they will be transitioning away from their role as “senior” royals and will begin splitting their time between the U.K. and North America in 2020. 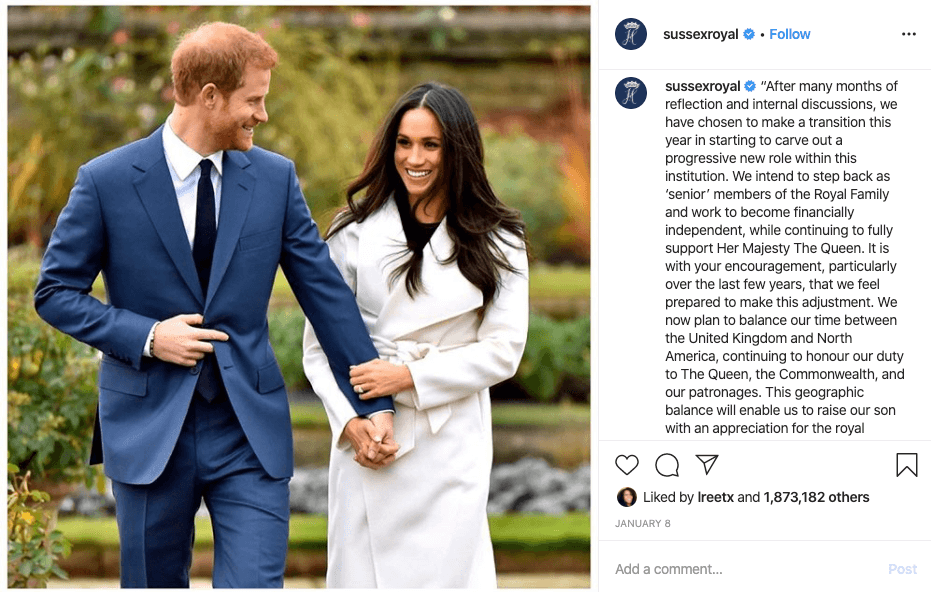 “After many months of reflection and internal discussions, we have chosen to make a transition this year in starting to carve out a progressive new role within this institution,” the Duke and Duchess said in the statement. “We intend to step back as ‘senior’ members of the Royal Family, and work to become financially independent, while continuing to fully support Her Majesty The Queen.”

It’s a move that came as a massive shock to Britons, with some even describing it as “seismic,” “selfish,” “rogue” and “an atrocious lapse of judgment,” reports the NY Times.

The British tabloids even blamed their exit entirely on Markle, dubbing it “Megxit,” and they place everything that goes wrong on the shoulders of the Duchess. They even blamed Markle for “allegedly failing to get on with her sister-in-law Kate Middleton,” according to CNN.

"People say I'm too critical of Meghan Markle," tweeted commentator Piers Morgan. "But she ditched her family, ditched her Dad, ditched most of her old friends, split Harry from William (and) has now split him from the Royal Family. I rest my case." And we asked for your opinion ... why?”

For some Black Britons, they know exactly why Markle wants out.

“From the very first headline about her being ‘(almost) straight outta Compton’ and having ‘exotic’ DNA, the racist treatment of Meghan has been impossible to ignore,” stated the NY Times. “Princess Michael of Kent wore an overtly racist brooch in the duchess’s company. A BBC host compared the couple’s newborn baby to a chimpanzee. Then there was the sublimely ludicrous suggestion that Meghan’s avocado consumption is responsible for mass murder, while her charity cookbook was portrayed as somehow helping terrorists.”

Maybe it was all a fairytale facade, a palace that gleams but is made of papier maché walls and fairy dust interiors. Little girls play “princess,” dress up as princesses, and dream of growing up to be real princesses. For Markle, her dreams growing up may not have been in the realm of becoming a princess or even a Duchess. She simply wanted to live in a world where she could do her part in making it better.

So now here she is.

If you want to be a princess, or rather, if you want to love a prince, are you expected to suffer a series of public indignities for the sake of following tradition? Undoubtedly, Markle has shown courage, strength, and tenacity in what was fundamentally a tough year as the receiver of often unjustified criticism.

Her treatment has shown many of us that no matter how poised and well-spoken you are, how many charities you support, how faithful you are, how successful you are, and even whom you marry, society’s racism will not let you live on greatness alone.

But still she rises and claims her stake in victory.

Instead of putting up with it and going along for the sake of getting along, maybe a decision was made which caused the Jenga pieces to fall, dismantling a “shaky, toxic system by speaking out clearly about the ways in which it fails to serve us,” as Daisy Buchanan puts it.

Harry’s mother Diana was known as the People’s Princess, and maybe that is something he sees in Meghan -- an activist, someone who is unafraid to tip the glass in favor of drawing attention to world matters.

Meghan’s move has taught us that when your happiness is being comprised, no matter ones’ princess pseudo-dreams, one has the power to simply walk away and start anew in your very own castle.

So I say to Harry and Meghan’s act of leaving — here’s a middle finger up to the racism, criticism, and the constant bullying and belittling, and cheers to you both as you gain your “financial independence” and “focus on the next chapter” of your happily-ever-after.

The new chapter involves the Duchess of Sussex reportedly signing a voiceover deal with Disney in exchange for a donation to a wildlife charity, Elephants Without Borders, an organization that helps to track and protect the animals from poaching. According to The Times, the deal that was signed before the couple made its decision to step aside as royals.

If I could leave just one piece of advice, it would the following:

Don’t wait until you are empty, live life to its very fullest.

A Judge-Ordered Purging of Nearly 234,000 WI Voters May Leave Some Out